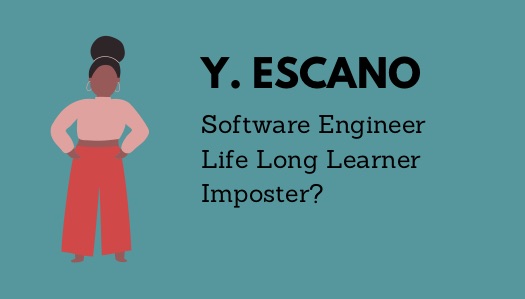 Back in 2017 I wrote about the dread of feeling like an imposter. At the time, I had been coding for about 4 months and was definitely feeling the pressure of being good at something completely new to me. Of course, it was self-imposed pressure. Even my husband didn’t understand why I was stressing over something I had just started to learn. I desperately wanted to be good at this new skill. It is not unrealistic to set certain goals and strive to achieve them, but this kind of pressure can lead to undue stress and lack of confidence. Almost 3 years into my coding journey, I thought that I would have overcome feeling like an imposter. The reality is that imposter syndrome is here to stay.

Since 2017, when I first heard the term, I’ve had conversations with different people about what imposter syndrome is and how they deal with it. I have talked with very successful people - project managers, software engineers, lawyers, educational directors, teachers - and they have all expressed a sense of feeling like a complete fake in their chosen profession. Additionally, they expressed a nagging feeling like they don’t belong. They also told me that they felt as if someone would come to them and kick them out of the space they occupied. They also told me that they know they sound crazy and irrational for having these feelings, but they couldn’t get over them so easily. The people I spoke to are extremely well-educated, have worked really hard to get to where they are, and have paid their dues. Someone actually told me that they live in fear that they are going to get kicked out of their job someday despite there not being any evidence that they did anything to deserve such treatment. This sounds dramatic, but that’s how dramatic it feels to the people that feel like an imposter.

I had no idea that the feeling was so prevalent throughout different careers and different skill sets. I have struggled with feeling like an imposter more often than I care to admit. Like the friends I spoke to, it’s not something that I can easily shake either. I try to justify my feelings by saying that I have not proven myself as a coder and that maybe once I’ve proven myself then the feeling will go away. But then I’ve encountered many software engineers that feel like imposters even though they’ve been working in the field for many years.

So I guess there is only one thing left to do. Embrace it, use it to your advantage and learn from it. Maybe having this imposter feeling is a good thing. I know it sounds crazy, but hear me out. We can dread it all we want, but what if we need to have this feeling loom over us to push ourselves to new heights in our careers and learning journeys? I think the argument can be made that we should embrace imposter syndrome and use it to fuel us. Indirectly, it has helped me to continue exploring tech, learning about new tools and putting myself in a position to keep growing. It’s easy to get stuck in the mind set that you don’t belong. I say I am here to stay - imposter syndrome and all.